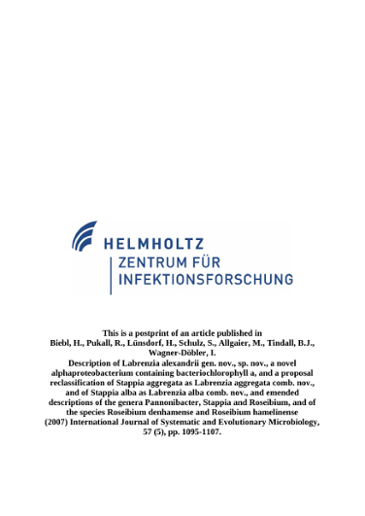 A slightly pink-coloured strain, strain DFL-11(T), was isolated from single cells of the marine dinoflagellate Alexandrium lusitanicum and was found to contain the genes encoding two proteins of the photosynthetic reaction centre, pufL and pufM. 16S rRNA gene sequence analysis revealed that the novel strain belonged to the alpha-2 subgroup of the Proteobacteria and was most closely related to Stappia aggregata (97.7 % similarity), Stappia alba (98.0 %) and Stappia marina (98.0 %). Dark-grown cells of strain DFL-11(T) contained small amounts of bacteriochlorophyll a (bchl a) and a carotenoid. Cells of strain DFL-11(T) were rods, 0.5-0.7 x 0.9-3.0 microm in size and motile by means of a single, subpolarly inserted flagellum. The novel strain was strictly aerobic and utilized a wide range of organic carbon sources, including fatty acids, tricarboxylic acid cycle intermediates and sugars. Biotin and thiamine were required as growth factors. Growth was obtained at sea salt concentrations of between 1 and 10 % (w/v), at a pH between 6 and 9.2 and at a temperature of up to 33 degrees C (optimum, 26 degrees C). Nitrate was not reduced and indole was not produced from tryptophan. Strain DFL11(T) was resistant to potassium tellurite and transformed it to elemental tellurium. The major respiratory lipoquinone was ubiquinone 10 (Q10). The polar lipids comprised phosphatidylglycerol, diphosphatidylglycerol, phosphatidylethanolamine, phosphatidylmonomethylethanolamine, phosphatidylcholine, an unidentified aminolipid and the glycolipid sulphoquinovosyldiacylglyceride. The fatty acids comprised 16 : 1 omega7c, 16 : 0, 18 : 1 omega7c, 18 : 0, 11-methyl 18 : 1 omega6t, 11-methyl 20 : 1 omega6t, 20 : 1 omega7c, 22 : 0, 22 : 1 and the hydroxy fatty acids 3-OH 14 : 0, 3-OH 16 : 0 (ester-linked), 3-OH 18 : 0, 3-OH 20 : 1 and 3-OH 20 : 0, all of which are amide-linked. The DNA G+C value was 56 mol%. Comparative analysis of alpha-2 subgroup 16S rRNA gene sequences showed that the type species of the genus Stappia, Stappia stellulata, is only distantly related to S. aggregata (95.3 % sequence similarity). Based on the combination of the 16S rRNA gene sequence data, a detailed chemotaxonomic study and the biochemical and physiological properties of members of the genera Stappia, Pannonibacter and Roseibium, it is proposed that S. aggregata, S. alba, S. marina are transferred to a new genus, Labrenzia gen. nov., as Labrenzia aggregata comb. nov., Labrenzia alba comb. nov. and Labrenzia marina comb. nov. The type species of the new genus is Labrenzia alexandrii sp. nov., with strain DFL-11(T) (=DSM 17067(T)=NCIMB 14079(T)) as the type strain. The pufLM genes of the photosynthesis reaction centre were shown to be present in some, but not all, species of the new genus Labrenzia and they were identified for the first time in S. stellulata. In accordance with the new data collected in this study, emended descriptions are provided for the genera Pannonibacter, Roseibium and Stappia.