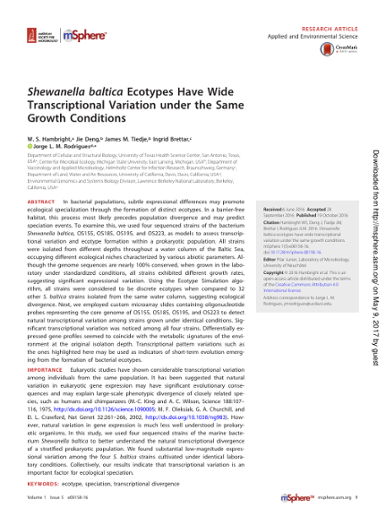 In bacterial populations, subtle expressional differences may promote ecological specialization through the formation of distinct ecotypes. In a barrier-free habitat, this process most likely precedes population divergence and may predict speciation events. To examine this, we used four sequenced strains of the bacterium Shewanella baltica, OS155, OS185, OS195, and OS223, as models to assess transcriptional variation and ecotype formation within a prokaryotic population. All strains were isolated from different depths throughout a water column of the Baltic Sea, occupying different ecological niches characterized by various abiotic parameters. Although the genome sequences are nearly 100% conserved, when grown in the laboratory under standardized conditions, all strains exhibited different growth rates, suggesting significant expressional variation. Using the Ecotype Simulation algorithm, all strains were considered to be discrete ecotypes when compared to 32 other S. baltica strains isolated from the same water column, suggesting ecological divergence. Next, we employed custom microarray slides containing oligonucleotide probes representing the core genome of OS155, OS185, OS195, and OS223 to detect natural transcriptional variation among strains grown under identical conditions. Significant transcriptional variation was noticed among all four strains. Differentially expressed gene profiles seemed to coincide with the metabolic signatures of the environment at the original isolation depth. Transcriptional pattern variations such as the ones highlighted here may be used as indicators of short-term evolution emerging from the formation of bacterial ecotypes. IMPORTANCE Eukaryotic studies have shown considerable transcriptional variation among individuals from the same population. It has been suggested that natural variation in eukaryotic gene expression may have significant evolutionary consequences and may explain large-scale phenotypic divergence of closely related species, such as humans and chimpanzees (M.-C. King and A. C. Wilson, Science 188:107-116, 1975, http://dx.doi.org/10.1126/science.1090005; M. F. Oleksiak, G. A. Churchill, and D. L. Crawford, Nat Genet 32:261-266, 2002, http://dx.doi.org/10.1038/ng983). However, natural variation in gene expression is much less well understood in prokaryotic organisms. In this study, we used four sequenced strains of the marine bacterium Shewanella baltica to better understand the natural transcriptional divergence of a stratified prokaryotic population. We found substantial low-magnitude expressional variation among the four S. baltica strains cultivated under identical laboratory conditions. Collectively, our results indicate that transcriptional variation is an important factor for ecological speciation.

Except where otherwise noted, this item's license is described as http://creativecommons.org/licenses/by-nc-sa/4.0/