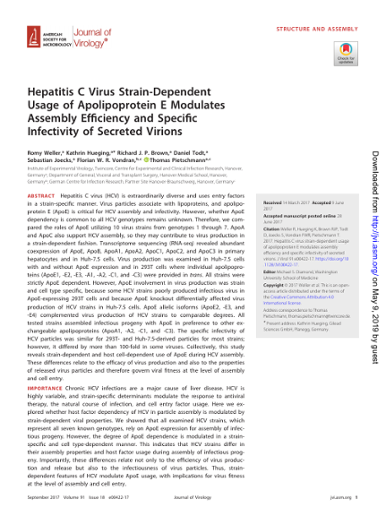 Hepatitis C virus (HCV) is extraordinarily diverse and uses entry factors in a strain-specific manner. Virus particles associate with lipoproteins, and apolipoprotein E (ApoE) is critical for HCV assembly and infectivity. However, whether ApoE dependency is common to all HCV genotypes remains unknown. Therefore, we compared the roles of ApoE utilizing 10 virus strains from genotypes 1 through 7. ApoA and ApoC also support HCV assembly, so they may contribute to virus production in a strain-dependent fashion. Transcriptome sequencing (RNA-seq) revealed abundant coexpression of ApoE, ApoB, ApoA1, ApoA2, ApoC1, ApoC2, and ApoC3 in primary hepatocytes and in Huh-7.5 cells. Virus production was examined in Huh-7.5 cells with and without ApoE expression and in 293T cells where individual apolipoproteins (ApoE1, -E2, -E3, -A1, -A2, -C1, and -C3) were provided in trans All strains were strictly ApoE dependent. However, ApoE involvement in virus production was strain and cell type specific, because some HCV strains poorly produced infectious virus in ApoE-expressing 293T cells and because ApoE knockout differentially affected virus production of HCV strains in Huh-7.5 cells. ApoE allelic isoforms (ApoE2, -E3, and -E4) complemented virus production of HCV strains to comparable degrees. All tested strains assembled infectious progeny with ApoE in preference to other exchangeable apolipoproteins (ApoA1, -A2, -C1, and -C3). The specific infectivity of HCV particles was similar for 293T- and Huh-7.5-derived particles for most strains; however, it differed by more than 100-fold in some viruses. Collectively, this study reveals strain-dependent and host cell-dependent use of ApoE during HCV assembly. These differences relate to the efficacy of virus production and also to the properties of released virus particles and therefore govern viral fitness at the level of assembly and cell entry.IMPORTANCE Chronic HCV infections are a major cause of liver disease. HCV is highly variable, and strain-specific determinants modulate the response to antiviral therapy, the natural course of infection, and cell entry factor usage. Here we explored whether host factor dependency of HCV in particle assembly is modulated by strain-dependent viral properties. We showed that all examined HCV strains, which represent all seven known genotypes, rely on ApoE expression for assembly of infectious progeny. However, the degree of ApoE dependence is modulated in a strain-specific and cell type-dependent manner. This indicates that HCV strains differ in their assembly properties and host factor usage during assembly of infectious progeny. Importantly, these differences relate not only to the efficiency of virus production and release but also to the infectiousness of virus particles. Thus, strain-dependent features of HCV modulate ApoE usage, with implications for virus fitness at the level of assembly and cell entry.