Measuring performance on the Healthcare Access and Quality Index for 195 countries and territories and selected subnational locations: a systematic analysis from the Global Burden of Disease Study 2016. 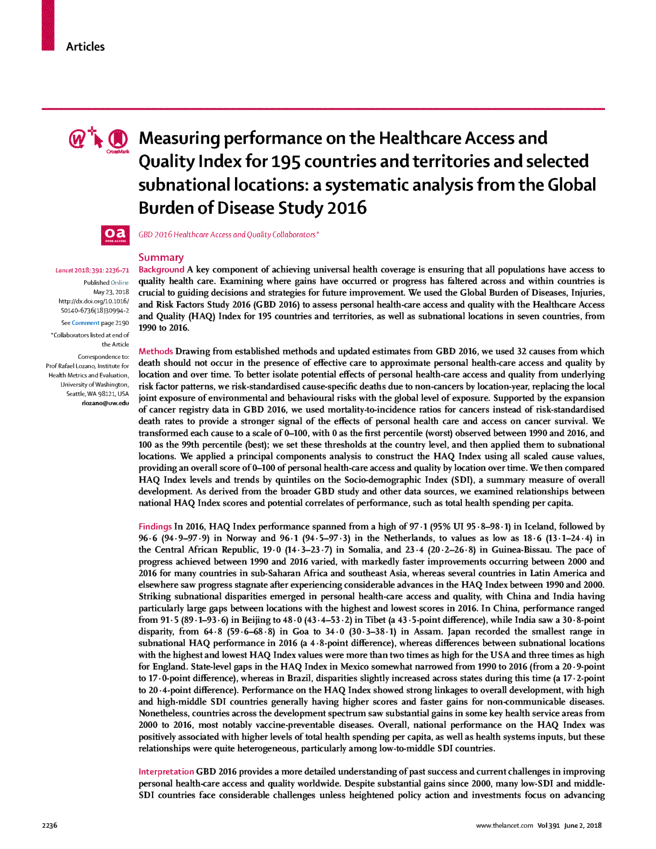 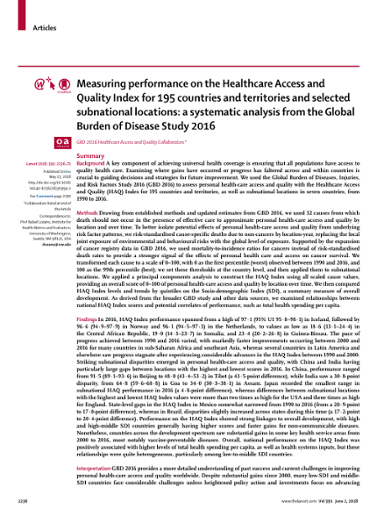 BACKGROUND: A key component of achieving universal health coverage is ensuring that all populations have access to quality health care. Examining where gains have occurred or progress has faltered across and within countries is crucial to guiding decisions and strategies for future improvement. We used the Global Burden of Diseases, Injuries, and Risk Factors Study 2016 (GBD 2016) to assess personal health-care access and quality with the Healthcare Access and Quality (HAQ) Index for 195 countries and territories, as well as subnational locations in seven countries, from 1990 to 2016. METHODS: Drawing from established methods and updated estimates from GBD 2016, we used 32 causes from which death should not occur in the presence of effective care to approximate personal health-care access and quality by location and over time. To better isolate potential effects of personal health-care access and quality from underlying risk factor patterns, we risk-standardised cause-specific deaths due to non-cancers by location-year, replacing the local joint exposure of environmental and behavioural risks with the global level of exposure. Supported by the expansion of cancer registry data in GBD 2016, we used mortality-to-incidence ratios for cancers instead of risk-standardised death rates to provide a stronger signal of the effects of personal health care and access on cancer survival. We transformed each cause to a scale of 0-100, with 0 as the first percentile (worst) observed between 1990 and 2016, and 100 as the 99th percentile (best); we set these thresholds at the country level, and then applied them to subnational locations. We applied a principal components analysis to construct the HAQ Index using all scaled cause values, providing an overall score of 0-100 of personal health-care access and quality by location over time. We then compared HAQ Index levels and trends by quintiles on the Socio-demographic Index (SDI), a summary measure of overall development. As derived from the broader GBD study and other data sources, we examined relationships between national HAQ Index scores and potential correlates of performance, such as total health spending per capita. FINDINGS: In 2016, HAQ Index performance spanned from a high of 97·1 (95% UI 95·8-98·1) in Iceland, followed by 96·6 (94·9-97·9) in Norway and 96·1 (94·5-97·3) in the Netherlands, to values as low as 18·6 (13·1-24·4) in the Central African Republic, 19·0 (14·3-23·7) in Somalia, and 23·4 (20·2-26·8) in Guinea-Bissau. The pace of progress achieved between 1990 and 2016 varied, with markedly faster improvements occurring between 2000 and 2016 for many countries in sub-Saharan Africa and southeast Asia, whereas several countries in Latin America and elsewhere saw progress stagnate after experiencing considerable advances in the HAQ Index between 1990 and 2000. Striking subnational disparities emerged in personal health-care access and quality, with China and India having particularly large gaps between locations with the highest and lowest scores in 2016. In China, performance ranged from 91·5 (89·1-93·6) in Beijing to 48·0 (43·4-53·2) in Tibet (a 43·5-point difference), while India saw a 30·8-point disparity, from 64·8 (59·6-68·8) in Goa to 34·0 (30·3-38·1) in Assam. Japan recorded the smallest range in subnational HAQ performance in 2016 (a 4·8-point difference), whereas differences between subnational locations with the highest and lowest HAQ Index values were more than two times as high for the USA and three times as high for England. State-level gaps in the HAQ Index in Mexico somewhat narrowed from 1990 to 2016 (from a 20·9-point to 17·0-point difference), whereas in Brazil, disparities slightly increased across states during this time (a 17·2-point to 20·4-point difference). Performance on the HAQ Index showed strong linkages to overall development, with high and high-middle SDI countries generally having higher scores and faster gains for non-communicable diseases. Nonetheless, countries across the development spectrum saw substantial gains in some key health service areas from 2000 to 2016, most notably vaccine-preventable diseases. Overall, national performance on the HAQ Index was positively associated with higher levels of total health spending per capita, as well as health systems inputs, but these relationships were quite heterogeneous, particularly among low-to-middle SDI countries. INTERPRETATION: GBD 2016 provides a more detailed understanding of past success and current challenges in improving personal health-care access and quality worldwide. Despite substantial gains since 2000, many low-SDI and middle-SDI countries face considerable challenges unless heightened policy action and investments focus on advancing access to and quality of health care across key health services, especially non-communicable diseases. Stagnating or minimal improvements experienced by several low-middle to high-middle SDI countries could reflect the complexities of re-orienting both primary and secondary health-care services beyond the more limited foci of the Millennium Development Goals. Alongside initiatives to strengthen public health programmes, the pursuit of universal health coverage hinges upon improving both access and quality worldwide, and thus requires adopting a more comprehensive view-and subsequent provision-of quality health care for all populations.

publications of the research group of epidemiology (EPID)