Intragenomic polymorphisms in the ITS region of high-quality genomes of the Hypoxylaceae (Xylariales, Ascomycota) 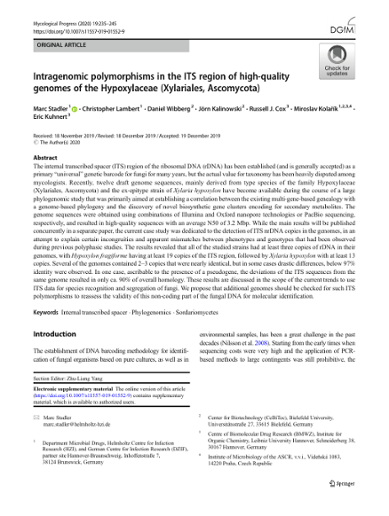 The internal transcribed spacer (ITS) region of the ribosomal DNA (rDNA) has been established (and is generally accepted) as a primary “universal” genetic barcode for fungi for many years, but the actual value for taxonomy has been heavily disputed among mycologists. Recently, twelve draft genome sequences, mainly derived from type species of the family Hypoxylaceae (Xylariales, Ascomycota) and the ex-epitype strain of Xylaria hypoxylon have become available during the course of a large phylogenomic study that was primarily aimed at establishing a correlation between the existing multi-gene-based genealogy with a genome-based phylogeny and the discovery of novel biosynthetic gene clusters encoding for secondary metabolites. The genome sequences were obtained using combinations of Illumina and Oxford nanopore technologies or PacBio sequencing, respectively, and resulted in high-quality sequences with an average N50 of 3.2 Mbp. While the main results will be published concurrently in a separate paper, the current case study was dedicated to the detection of ITS nrDNA copies in the genomes, in an attempt to explain certain incongruities and apparent mismatches between phenotypes and genotypes that had been observed during previous polyphasic studies. The results revealed that all of the studied strains had at least three copies of rDNA in their genomes, with Hypoxylon fragiforme having at least 19 copies of the ITS region, followed by Xylaria hypoxylon with at least 13 copies. Several of the genomes contained 2–3 copies that were nearly identical, but in some cases drastic differences, below 97% identity were observed. In one case, ascribable to the presence of a pseudogene, the deviations of the ITS sequences from the same genome resulted in only ca. 90% of overall homology. These results are discussed in the scope of the current trends to use ITS data for species recognition and segregation of fungi. We propose that additional genomes should be checked for such ITS polymorphisms to reassess the validity of this non-coding part of the fungal DNA for molecular identification.