Fusarium: more than a node or a foot-shaped basal cell. 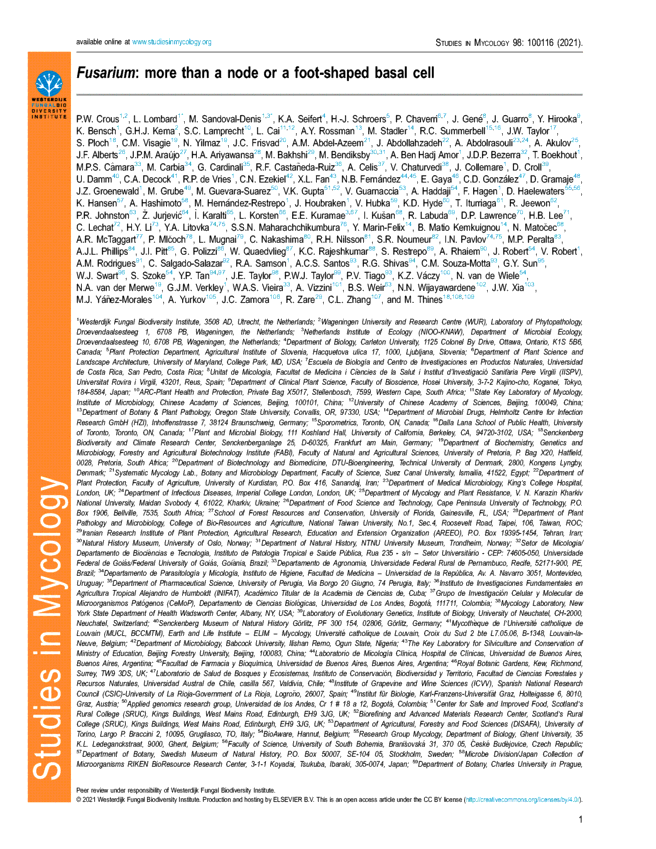 Recent publications have argued that there are potentially serious consequences for researchers in recognising distinct genera in the terminal fusarioid clade of the family Nectriaceae. Thus, an alternate hypothesis, namely a very broad concept of the genus Fusarium was proposed. In doing so, however, a significant body of data that supports distinct genera in Nectriaceae based on morphology, biology, and phylogeny is disregarded. A DNA phylogeny based on 19 orthologous protein-coding genes was presented to support a very broad concept of Fusarium at the F1 node in Nectriaceae. Here, we demonstrate that re-analyses of this dataset show that all 19 genes support the F3 node that represents Fusarium sensu stricto as defined by F. sambucinum (sexual morph synonym Gibberella pulicaris). The backbone of the phylogeny is resolved by the concatenated alignment, but only six of the 19 genes fully support the F1 node, representing the broad circumscription of Fusarium. Furthermore, a re-analysis of the concatenated dataset revealed alternate topologies in different phylogenetic algorithms, highlighting the deep divergence and unresolved placement of various Nectriaceae lineages proposed as members of Fusarium. Species of Fusarium s. str. are characterised by Gibberella sexual morphs, asexual morphs with thin- or thick-walled macroconidia that have variously shaped apical and basal cells, and trichothecene mycotoxin production, which separates them from other fusarioid genera. Here we show that the Wollenweber concept of Fusarium presently accounts for 20 segregate genera with clear-cut synapomorphic traits, and that fusarioid macroconidia represent a character that has been gained or lost multiple times throughout Nectriaceae. Thus, the very broad circumscription of Fusarium is blurry and without apparent synapomorphies, and does not include all genera with fusarium-like macroconidia, which are spread throughout Nectriaceae (e.g., Cosmosporella, Macroconia, Microcera). In this study four new genera are introduced, along with 18 new species and 16 new combinations. These names convey information about relationships, morphology, and ecological preference that would otherwise be lost in a broader definition of Fusarium. To assist users to correctly identify fusarioid genera and species, we introduce a new online identification database, Fusarioid-ID, accessible at www.fusarium.org. The database comprises partial sequences from multiple genes commonly used to identify fusarioid taxa (act1, CaM, his3, rpb1, rpb2, tef1, tub2, ITS, and LSU). In this paper, we also present a nomenclator of names that have been introduced in Fusarium up to January 2021 as well as their current status, types, and diagnostic DNA barcode data. In this study, researchers from 46 countries, representing taxonomists, plant pathologists, medical mycologists, quarantine officials, regulatory agencies, and students, strongly support the application and use of a more precisely delimited Fusarium (= Gibberella) concept to accommodate taxa from the robust monophyletic node F3 on the basis of a well-defined and unique combination of morphological and biochemical features. This F3 node includes, among others, species of the F. fujikuroi, F. incarnatum-equiseti, F. oxysporum, and F. sambucinum species complexes, but not species of Bisifusarium [F. dimerum species complex (SC)], Cyanonectria (F. buxicola SC), Geejayessia (F. staphyleae SC), Neocosmospora (F. solani SC) or Rectifusarium (F. ventricosum SC). The present study represents the first step to generating a new online monograph of Fusarium and allied fusarioid genera (www.fusarium.org).

Except where otherwise noted, this item's license is described as Attribution 4.0 International